Accumulators
A container which stores fluid under pressure. Used as an energy source or to absorb hydraulic shock. Common types are piston, bladder and diaphragm.
Actuator, pneumatic/hydraulic
A device in which power is transferred from one pressurized medium to another without intensification. In essence it converts hydraulic pressure into motion
Additive
A chemical added to a fluid to impart new properties or to enhance those which already exist.
Air Bleeder
A device for the removal of air from a hyrdaulic line.
Air Breather
A device permitting air movement between atmosphere and the component in which it is installed.

Bleeder (Bleed Valve)
A device for removal of pressurized fluid. Usually used to bleed air or oil from system.

Cavitation
A circumstance that occurs in pumps when existing space is not filled by available fluid. Cavitation occurs when vapor bubbles form in flowing liquid. Cavitation will deteriorate the hydraulic oil and cause erosion of the inlet metal.
Circuit (Open)
A circuit in which return fluid is directed to the reservoir and converts the liquid into a physical motion.
Circuit (Pilot)
Used to control a main circuit or component.
Circuit (Regenerative)
Used to increase cylinder speed by directing rod end discharge to the piston side of the cylinder. Can be incorporated into directional control valve as fourth position.
Closed-Center System
A system in which the pump continually operates against a load, even in the neutral condition.
Closed Center Valves
This type of valve is used in a hydraulic system where the valve blocks the flow of oil from the pump into an accumulator. The accumulator is used to store the oil under pressure. This valve takes the pressure off the pump and in neutral locks the cylinder in place with no load on the pump.
Contaminant
Any material or substance which is unwanted or adversely affects the fluid power system or components, or both.
Control Valves
The ways you can harness the power of a hydraulic system is through the use of control valves. The three basic types of control valves are the tandem center type, the open center (motoring spool) type, and the closed center type. Both the tandem center and the closed center types are available in a three way or four way valve. By opening or closing valves, you can control how much or in what direction a hydraulic piston moves. Valves can also control many pistons working with each other at the same time.
Cushion
A device which provides controlled resistance to motion.
Cylinder
A hydraulic actuator constructed of a plunger or piston inside a cylindrical housing. The piston or plunger operates because of pressurized liquid.
Cylinder cap
A cylinder end closure which completely covers the bore area.
Cylinder capacity, extending
Volume required for one full extension of the cylinder.
Cylinder capacity, retracting
Volume required by one full retraction of the cylinder. (Generally, less than extending)
Cylinder; Depth Control
A mechanical or hydraulic device, adjustable, for limiting cylinder stroke.
Cylinder; Double Acting
A cylinder which can apply force and motion in either direction.
Cylinder; Rephasing
A cylinder design which permits the use of two or more cylinders in series, automatically synchronizing cylinder position at the end of each stroke.
Cylinder; Single Acting
A cylinder which can apply force in one direction only.
Cylinder Thrust
The push of a cylinder in pounds: Thrust = Piston Area (in.) x Pump Pressure (PSI) or Thrust = bore diameter squared x .78 x PSI

Detent
A spring device which maintains the spool of a directional control valve in position.
Detent Release
A mechanical, hydraulic or electrical device for releasing the detent.
Displacement
The amount of liquid transferred from the inlet of the pump to the outlet in a single revolution. Displacement can be fixed or variable.

Filter
A device incorporated into a hydraulic system to remove contaminants from the oil.
Fitting
A device for connecting hose or pipe to hydraulic components.
Float Spool
A spool valve design which connects all ports to the tank (return) port, usually in a detented fourth position, allowing a cylinder or motor to “float.”
Flow Rate
The amount of liquid volume that passes a given point in a given time. Flow rate is commonly measured in gallons per minute (gpm).
Fluid Power
Energy transmitted and controlled through use of a pressurized fluid.
Fluid Power System
The transmission and control of power through the use of fluid pressure.

Head
Vertical distance measured between two stages in a liquid. It measures the pressure exerted by the weight of liquid above a specified point
Heat Exchanger
A device which transfers heat through a conducting wall from one fluid to another. (Typically to cool a system.)
Horsepower
The horsepower required to drive a pump is dependent on both pressure and output in GPM. The higher the pressure, or greater the volume, the more Horsepower (HP) required. As a rule of thumb, a 1000 PSI (pounds per square inch) pump will require 1 Horsepower (HP), for the first gallon per minute and 3/4 HP each gallon per minute after that. Doubling the pressure or output volume will require 4 time the input HP. The math: Input HP= GPM x PSI / 1714
Hydraulic Actuator
The piece of machinery that receives pressure from the energized fluid and then converts it to motion and mechanical force.
Hydraulic Cylinders
Hydraulic cylinders transform the pressure and oil flow in a hydraulic system into work or mechanical force. They are used where linear motion is required to move something. Cylinders are ususally double-acting, that is, oil under pressure can be applied to either side of the piston to provide movement in either direction. Single acting cylinders are sometimes used where the weight of the load is used to return the cylinder to the closed position.
Hydraulic Hose
A relatively thick hose that transfers liquids to and from hydraulic pumps.
Hydraulic Motors
Hydraulic motors are another important piece of the hydraulic system. However, instead of a cylinder (force moving linear) the motor uses hydraulic pressure to rotate. In terms of how it’s built, a motor is like al pump. But, when it’s operated oil enters the motor and turns the shaft. The speed of a hydraulic motor is dependent on the amount of oil supplied by the pump and the torque is dependent on the amount of pressure supplied.
Hydraulic Power Unit
Any device used to create kinetic energy within a hydraulic system. Motors and manual energy are both sources of power in hydraulic power units.
Hydraulic Tester
A device used to troubleshoot and check hydraulic powered system components by filling them to a required pressue level.
Hydraulic Valve
A device used to regulate water distribution in hydraulic applications.
Hydraulics
The science dealing with the transmission of force through the medium of a contained fluid.
Hydrostatic Transmission
Combination of one or more hydraulic pumps and motors forming a unit that transfers power through hydraulics.

Open-Center System
A system in which the yield of the pump has a free-flow passageway back to the reservoir, while in the neutral condition.
Open Center Valves
Open center valves are the same as the tandem center, except that in the neutral position all lines are connected back to the reservoir. The primary use of this system is to prevent “shock” loading when the valve is placed in neutral. This takes pressure off the motor. This system is used in situations where the operating device needs to be moved by hand.
Output
The Output of a hydraulic pump (gallons per minute, or GPM) is related directly to its operating speed. The pressure of a pump is determined by its manufactured capabilities.

Piping
When you are connecting up a hydraulic system, use the tubing or pipe that is capable of handling heavy pressures and loads required by the hydraulic system. Pipes should have a minimum number of bends and fittings, should be securely fastened and and clean. Iron pipes are not recommended because they have particles that will flake off and contaminate a system.
Piston
A device used for converting hydraulic power to mechanical energy. In hydraulic pumps, the piston is responsible for pushing down and pulling up the ram.
Port
The internal or external terminus of a passage. The point where the fitting is attached.
Power Unit
A combination of pump, pump drive, reservoir, controls and conditioning components to supply hydraulic power to a system.
Pressure
The force per unit area, expressed in pounds per square inch (psi), bars, or atmospheres.
Pressure; Back
The pressure encountered on the downstream or return side of a component.
Pressure; Cracking
The pressure at which a pressure operated valve begins to pass fluid.
Pressure; Maximum Rated
The maximum pressure at which a component should be operated on a continuous basis, usually the relief valve setting at maximum flow rate.
Pressure Relief Valves
A pressure relief valve is a safety device and is required on all hydraulic systems. Once adjusted, the pressure relief valve opens whenever the pressure goes beyond the value set and allows oil to flow back to the reservoir.
Pumps
The building block of any hydraulic system is the pump. The four most common designs are the vane, gear, gerotor and piston. All are well suited to common hydraulic uses with the piston design best suited for higher pressures. The variable displacement type is particularly well suited in circuits using hydraulic motors where variable speeds and the ability to reverse is needed.

Ram
A hydraulic mechanism that uses the kinetic energy of a flowing liquid to force a small amount of the liquid to a reservoir contained at a higher level.
Reservoirs
The size of a reservoir will depend on the capacity of the hydraulic system, as well as what is required by the system. The reservoir should contain a large volume of oil and should provide ample oil to the pump.
Resistance
In hydraulics, the condition engendered by an obstruction or restriction in the flow path.

Seal
A device which prevents or controls the escape or passage of hydraulic fluid.

Tandem Center Valves
Using tandem center valves when in a neutral position bypasses the flow of hydraulic oil to the return line. This is used to hold the cylinder/piston in position with no load on the pumps. When this system is the pump is running constantly to keep a ready supply of hydraulic oil, but as long as the cylinder/piston is not in operation the pump is working under no pressure or load. This system keeps wear and tear on the pump down to a minimum. 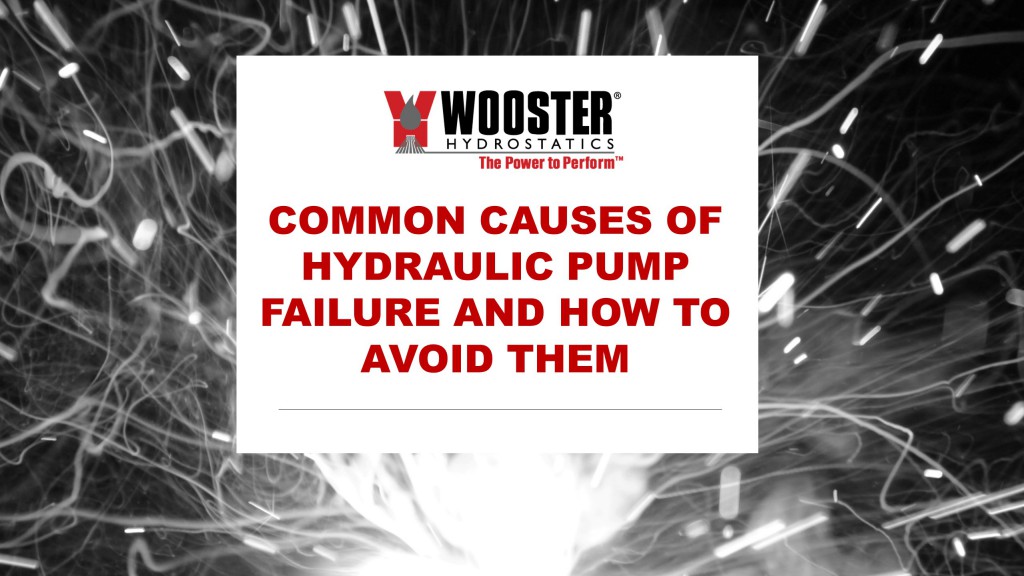 Due to manufacturer restrictions, we are unable to repair pumps for zero turn mowers or any lawn mowers.

Due to manufacturer restrictions, we are unable to repair pumps for zero turn mowers or any lawn mowers.